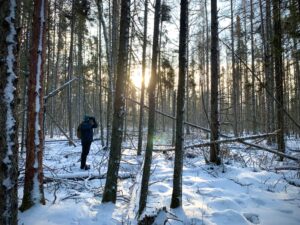 Photo by Kristina Dexter-Nienhaus
The Duluth Christmas Bird Count has a long and varied history. Officially, the count started in 1938 and has been undertaken every year, but four since then. Since then, the count circle has changed, shifted, and moved until 1980 when the present count circle was set by Kim Eckert. The count has counted nearly 550,000 birds of 147 species. Of those birds, only one species has been documented on every single count since 1938… but to learn its identity, you must attend the talk! This talk will cover a wide variety of topics, including species observed, trends on observations of specific species, and notes on how you might participate in Christmas Bird Counts!
Presenter information: Clinton Dexter-Nienhaus is the current compiler of the Duluth Christmas Bird Count, a title he has held for the last 3 years. An avid CBC participant, Clinton usually participates in 3 CBC’s per season and has participated in counts in four counties.